The meeting of Preston Lodge of Sincerity No 8085 was an occasion of ‘ladies to dine’. Consequently, the business of the lodge was quickly dealt with, whereupon the brethren retired and joined the ladies for an evening of fun and entertainment. 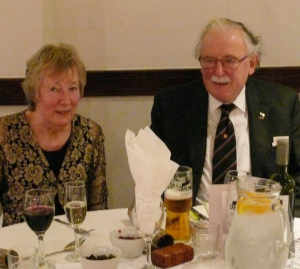 The WM and his lady.

The lodge engaged the services of the well-known local singer and entertainer Poppy Holiday. After the formality of the meal, Poppy wasted no time in getting the evening to roll.

Her songs covered the various decades of the membership of the lodge. Indeed, at the request of Eileen Lythgoe, aged 93, Poppy sang various well-known songs by Vera Lynn.

Eileen Lythgoe, during the Second World War, had served with the Women’s Royal Naval Service; she is proud of her service to the extent that until recently she attended the Remembrance Day Service in Whitehall and marched with the WRNS contingent in the subsequent parade.

When it came to the time to introduce the brethren and their ladies to various Irish folksongs, Poppy sought the assistance of brethren to volunteer as Irish tap dancers. 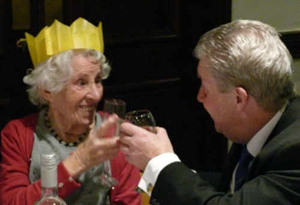 Howard Lythgoe, wearing a funny hat, perhaps fortified by a good meal, rose to the challenge ably assisted by Byron Molyneux, the son of the lodge junior warden, who really was quite energetic in his portrayal; everyone agreed that the volunteer Irish dancers were magnificent in their interpretation.

Following on from this, Poppy introduced a form of musical partners; in effect the last man remaining at a break in the music had to dance with a broom!!  Anyone looking into the proceedings would have seen Freemasons enjoying themselves.

As appreciation of the talented singing, Poppy received many encores, to which she graciously responded and was eventually allowed to leave the stage.  Brethren are encouraged to look up Poppy on Facebook or YouTube for examples of the wonderful evening she provided for the brethren of Preston Lodge of Sincerity as well as their ladies and the many visitors who attended.

Howard Lythgoe with his funny hat.