Tony presents David with his collarette 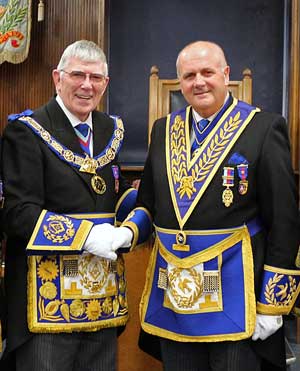 Tony (left) thanks David for his Masonic contribution to the Province.

Having welcomed Tony and thanked him for his presence, the WM announced the main business of the evening, to present David with his Past Assistant Provincial Grand Master collarette and jewel.

Provincial Grand Director of Ceremonies Malcolm Bell, escorted David to the WM’s pedestal where he was joined by the Provincial Grand Master. Tony proceeded to thank David for all the tremendous work in support of Freemasonry he had done during his six and a half years as an assistant. He proceeded to formally present David with his collarette hoping he had enjoyed his years in office and wished him well for a long and happy retirement. On a personal note, he thanked David for his contribution to the Province and what he continues to do. Those present acknowledged the occasion with resounding and sustained applause.

In response, David thanked Tony for his presentation and the generosity of his kind words associated with it. He turned to the brethren saying he felt ‘humbled and gobsmacked’ to see so many brethren present. Once everything had settled back to normal, the traditional closing of the lodge took place before all retired for refreshment.

At the festive board later in the evening, in response to the toast to the grand officers, David Randerson gave his personal thanks and gratitude to David. He reminded the brethren, that all that can be asked of a person is to give of his best and was convinced David had certainly done just that. He thanked him for all he had done for the Preston and South Fylde Groups and for Freemasonry in general. Using his own words, David concluded by ‘rolling over’ to propose the toast to the health of the Provincial Grand Master.

In response, Tony thanked David for the toast to his health and, turning to the brethren, hoped they had all had a wonderful evening. He took the opportunity to remind the brethren of the need to look for new members from outside the Craft and, having attracted them, make every effort to retain them. Similarly, encouragement to return, should be given to those who have left Freemasonry. He was equally encouraged by the formation of ‘Light Blues’ clubs to specifically foster the interests of the newer brethren to the Craft. Not forgetting the Royal Arch, he urged those who have yet to take that step to consider joining this stimulating and vibrant order.

Turning to the present, he congratulated all those who were to receive honours at the forthcoming meeting of Provincial Grand Chapter and asked companions of the order to give them their full support on the day.

Mentioning the MCF 2021 Festival, Tony thanked everyone for their contributions at this halfway point in the Festival and urged the brethren to continue the good work and wear their Festival Jewel with pride.

He thanked everyone for a wonderful evening, particularly mentioning the hard work of the lodge’s secretary, Hal Hamer and DC, John Kay in organising the event.

He turned to David Winder saying what a pleasure it had been for him to present him with his collarette and jewel. He continued by giving a brief history of David’s Masonic career from his initiation in to Ribble Lodge No 4558 to his time as an assistant. He thanked David for the admirable manner he had carried out his duties and was sorry to see him move on. Tony concluded his remarks by wishing both David and his wife Sue all the best for the future.

To give some idea of his workload during the six and a half years he was in office as an assistant, David has attended over 140 installations as the principal guest. He personally interviewed 89 brethren prior to them celebrating 50 or 60 years in Freemasonry and, of course, presided at the following celebration in the relevant lodge. In addition, he has supported groups within the Province by making some 1,200 lodge visits.

As a member of the Cabinet, his portfolio included responsibility for charity both pre and now during ‘Festival’ and a previous commitment as chairman of the Masonic Halls Appeal. He served on the ranks committee for five years, covered attendances at UGLE and provided supportive administration of two groups and three Masonic halls, all of which, has more than kept him occupied.

In response David thanked everyone for what had been an unbelievable evening feeling blown away by the numbers in attendance. He remembered being welcomed into Ribble Lodge, a lodge he found to be an oasis of values and morals in a world that generally does not. He referred to his Masonic career as ‘having a ball’ more so enjoyed by having the valued support of the brethren and all the teams with whom he had been involved.

He continued by saying: “It’s the friendships you make in life that count,” and concluded by thanking all who had made this wonderful evening happen. The brethren, in turn, responded with a sustained standing ovation as a tribute to David’s past and continuing contribution to Freemasonry.

Some of the 120 diners enjoying the festive board.

Article and photographs by Phil Cragg.