The Setantia Lodge of Installed Masters No 7755 had the pleasure of hosting a presentation of the 2019 Prestonian Lecture delivered by 2019 lecture presenter, Michael Karn. The event was kindly co-sponsored by the Preston Group Study Circle. 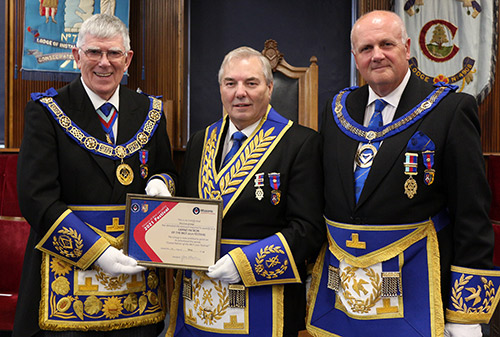 This being a regular meeting, the lodge was opened by the WM David Asbridge in due form for the transaction of the administrative business of the lodge. It was business that, following a successful ballot, included welcoming Peter Bennett and Peter Whitehead as the most recent joining members of the lodge and the treasurer, Trevor Phillips, gaining the approval of the lodge following his presentation of the 2018 audited accounts.

Assistant to the Provincial Grand Director of Ceremonies, Peter Littlehales, having gained entry to the lodge, announced the presence of the Provincial Grand Master. He duly entered accompanied by grand and acting Provincial grand officers to be welcomed by David who concluded his welcome by offering the PrGM the gavel of the lodge. In returning it, Tony said he was there to enjoy himself in a relaxing environment, and in his case, without any pressure.

David then introduced and welcomed the guest speaker for the evening, the 2019 Prestonian Lecturer, Michael Karn.

After giving a brief introduction to the meaning of a Prestonian Lecture, Mike began his discourse on English Freemasonry during the Great War. The lecture varied from discussion regarding the recorded lodge minutes of the day, that gave no indication that a major conflict was in progress, to the closure of lodges with German connections. He also mentioned the exclusion of German brethren from lodges of which they had been well-respected members for many years. It was a well-researched subject that provided much food for thought and held the attention of the brethren for the full 40 minutes of the presentation. Its conclusion was followed by sustained applause from all the brethren present. The WM thanked Michael for his lecture and the interesting and thought-provoking way he had presented it before the lodge once again broke into sustained applause. 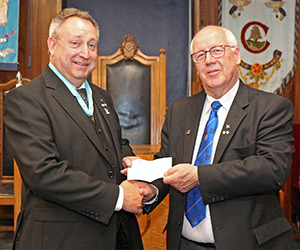 David Parker, (left) presents Alan Howarth with the cheque from the 2019 Preston Masters.

To complement the talk, Mike had brought copies of his lecture in book form that also expanded on what he had communicated in his lecture. The profits from the sale of the book would go to his chosen charity, The Royal Masonic Trust for Boys and Girls.

A charity collection was taken that raised the sum of £159 in the white envelopes and £133 in cash, the overall charity total being £292. As the Province is currently in Festival, using the white envelope scheme, it had earlier been agreed that all cash donations would be donated to the lecturer’s chosen charity.

In recognition of the quality and the interest the lecture had engendered, the lodge decided to round up the collected cash charity donation to £250 to supplement the profits generated by the sale of 30 books.

There then followed an additional item where the Provincial Grand Master took the opportunity to formally present the Preston Group Chairman Steve Bolton, with a certificate of achievement that identified the Preston Group as Grand Patrons of the MCF 2021 Festival. In turn, Steve thanked all the members of the group who are supporting the Festival and the PrGM for his support of Freemasonry.

In a further addition to the agenda, the Chairman of the 2019 Preston Masters Group David Parker, had the pleasure of presenting a cheque for £450 to the Masonic hall. The amount represented the profits generated from the 2019 Preston Masters Quiz Night held earlier in the season. Alan Howarth, in turn, had equal pleasure in accepting the cheque on behalf of the hall. 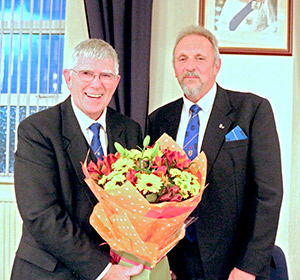 Following an excellent 3-course meal produced and served by chef Alistair and his staff, David Winder rose to propose the toast to the health of the Provincial Grand Master in which he thanked Tony for all he does for Freemasonry and the support he gives to the Preston Group.

In response, Tony thanked David for the toast to his health, saying what a delight it was to be in Preston once again. It was a visit that gave him the opportunity to visit an installed master’s lodge and, on this occasion, to listen to a wonderful presentation of the Prestonian Lecture.

He reminded the brethren of ‘Solomon’, the online learning resource, for making a daily advancement in Masonic knowledge. He encouraged everyone to access the site and thereby hopefully learn from it.

Continuing, Tony thanked the Preston Group for their generous support of the Festival, support that had resulted in the acquisition of a Grand Patron’s certificate. Turning to the lodge members, he closed by thanking them for the warmth of the welcome he had received on what had been, an enjoyable and relaxing evening.

In response to the toast to his health, David, as WM, thanked all those who had assisted in making the evening so enjoyable. Particular thanks went to the IPM, Peter Nicholson, who in his position as lecture secretary of the lodge had successfully obtained the agreement of the 2019 Prestonian Lecturer, Mike Karn to deliver his lecture in the lodge. He thanked Mike for what had been an illuminating and thought-provoking lecture that had been enjoyed by all. He also thanked the Preston Masonic Study Circle for their co-sponsorship of the event and closed by thanking Simon Wright and his contingent of ‘Ashlar Blues’ for their support for the event.

Concluding the proceedings David had the pleasure of presenting Tony with a bouquet of flowers for his wife Maureen, hopefully to provide some compensation for her being without his company on yet another evening.

Surrounded by grand officers and flanked by the PrGM and the WM, is Mike Karn (centre).