Brian remains in the chair for a second year

Following unforeseen and short notice circumstances, Brian Robertson willingly agreed to continue in office as master of the Royal Preston Lodge No 333 for a second year. As there is no agreed formal ritual for a proclamation ceremony, the lodge director of ceremonies, Peter Littlehales, introduced a format that worked well, and maintained the expectations of an installation ceremony. 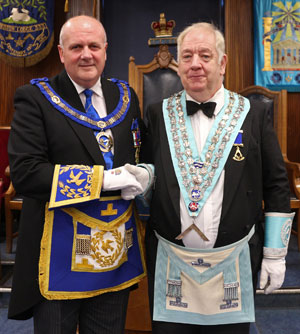 David (left) thanks Brian for his commitment to the lodge.

Brian, as master of the lodge, welcomed all the visitors before opening the lodge in the first degree. After transacting the administrative business of the lodge, it was raised to the second degree, before Peter, as DC, requested permission to retire from the lodge. During his absence, the lodge was raised to the third degree before Peter returned to announce the presence of Assistant Provincial Grand Master David Winder. David duly entered the lodge accompanied by grand and Provincial grand officers to be formally welcomed by Brian, who concluded by offering him the gavel of the lodge. David returned the gavel, thanking Brian for his warm welcome saying he was looking forward to what he was aware was a ‘different’ ceremony.

Following salutations to the principal guest, the grand and Provincial grand officers, Brian rose to thank his officers and the members of the lodge for their valued support during his year as master of the lodge.

Peter, then had the pleasure of occupying the floor of the lodge to proclaim Brian as remaining in office, as master of the lodge, for a second year. 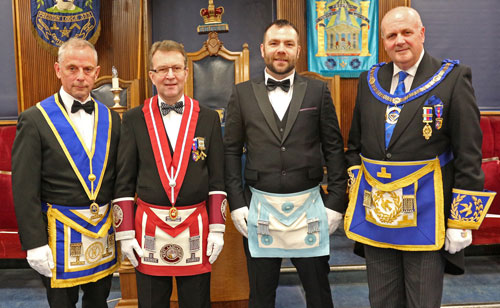 The officers were appointed and invested in turn with both wardens being informed of their duties by Teddy Foster and addressed by Simon Worswick. Stuart Elliott, returning to the office of chaplain, was addressed by Stuart Handley and Terry Strickland, taking office as the inner guard, was addressed by Fred Hewitt. The appointed stewards were addressed by William Thompson. The final address, that to the lodge brethren, was given by the principal guest, David Winder.

At the conclusion of the ceremony David brought the congratulations and best wishes of the Provincial Grand Master Tony Harrison. On his behalf, he thanked Brian for readily agreeing to continue as master of the lodge for a second year. He congratulated the lodge on what had been a dignified ceremony that had obviously involved a lot of hard work. David proceeded round the room personally congratulating and thanking all the brethren that had a part to play in the ceremony. He concluded his comments on behalf of the Provincial Grand Master by thanking the acting rank officers for their support wishing them well for their continuing year in their respective roles.

Brian responded by thanking David for his generous comments on behalf of the Provincial Grand Master and had the pleasure of presenting him with two cheques, the first for £333 in support of the 2021 Festival and the second to the value £50 in support of the Masonic hall. Later in the evening, following the installation banquet, a ‘Chorley Raffle’ was held that raised £161 to be equally divided between the Festival and the Hall. 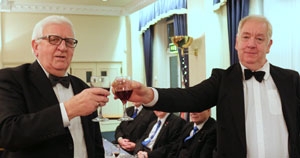 Ray (left) toasts Brian at the conclusion of the master’s song.

During the banquet, in response to toast number three and after setting the scene in a humorous manner, David brought his own congratulations on a ceremony well done. He thanked and congratulated Brian for taking on a second year as master at such short and unexpected notice. He hoped that, during his second year, Brian would find it a year of health, happiness and fulfilment.

Turning to the lodge members, he congratulated all those that had a part to play in what had been a wonderful ceremony. He particularly mentioned the excellent working tools team of Stuart Handley, Simon Worswick and Terry Strickland.

He went on to thank the acting officers for their support wishing them well during their year in that role. He congratulated Peter Littlehales on representing the lodge so well in his continuing role as an Assistant to the Provincial Grand Director of Ceremonies.

Moving on, David was pleased to note that, as a result of being more open, membership of the Craft in West Lancashire is back on the rise, in recent times, going up from 8,600 to nearly 9,000. He was pleased to see so many brethren wearing the Festival Jewel, thanking those that had already personally pledged to it and invited those who had yet to take that step to consider doing so and help aid and benefit those in need. 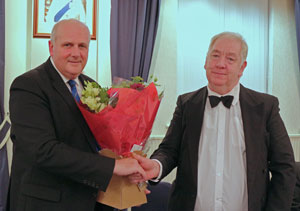 David (left) receives the bouquet from Brian on behalf of Sue.

To put this into perspective, David went on to mention the over £1,000,000 was needed to support the Provinces Masons, widows and dependents every year and reminded the brethren that the Province receives more in contributions from the MCF than the donations it makes to the fund. He encouraged those contributors who are tax payers to make their donations using the white envelope scheme and thereby enable the charity to receive an extra 28% on their contributions by way of Gift Aid. In addition, any donations made in this way would accrue to a brother’s personal patronage of the Festival. In talking about charity, David took the time to thank the members for the donations made earlier in the lodge.

Changing the subject, David turned to the Royal Arch saying he was delighted to see so many brethren wearing Royal Arch jewels. It was a degree he found most colourful and enthralling and one that is the completion of Craft Masonry. He encouraged those present who are not members of the Royal Arch to have a word with those colleagues who are and, hopefully, to go on to membership.

He concluded by thanking the group chairman Steve Bolton, for the invitation to attend the evening’s event and the lodge for the warmth of its welcome and closed by inviting brethren to, above all, enjoy their Masonry and be open about it.

The festive celebrations continued, to be further enhanced by a delightful rendition of the master’s song given by Ray Beech accompanied by Mike Hatton on the piano. The evening was rounded off with a presentation of a bouquet of flowers to David for him to pass to his wife Sue, as an appreciation from the lodge for being without his company for another evening.