Bill installs his son Phillip in the chair

Bill Woods had the pleasure of installing his son Phillip into the chair of Festival Lodge No 8123 in a delightful ceremony conducted by the members of the lodge. 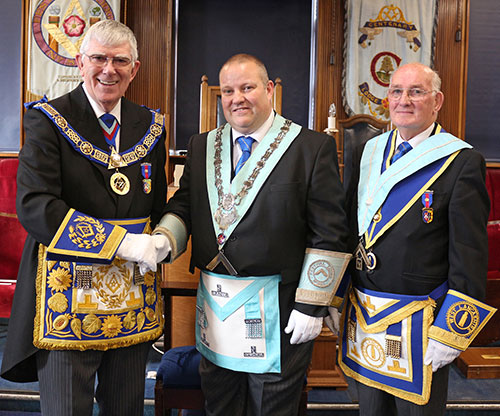 Richard Maddocks, as master of the lodge, welcomed all the visitors before opening the lodge in the first degree. After transacting the administrative business, it was raised to the second and then the third degree before Keith Kemp entered to announce the presence of the Provincial Grand Master accompanied by David Winder with Steve Bolton and acting Provincial grand officers in attendance. Tony duly entered the lodge to be formally welcomed by Richard, who concluded by offering him the gavel of the lodge. Tony returned the gavel, thanking Richard for his warm welcome saying he was looking forward to what he was aware was a ‘different’ ceremony.

Following salutations and before the commencement of the installation ceremony, the lodge returned to the second degree before the Provincial Grand Master was invited to present the newest member of the lodge, Daniel Rigby, with his Grand Lodge Certificate. It was a task that he willingly completed with pleasure.

The installation ceremony commenced with lodge member Martin Wootton presenting master elect, Phillip Woods to Richard for installation. Richard informed him of his forthcoming duties as master and accepted his obligation to do so.

The lodge returned to the third degree and, on this special occasion, Richard then invited Bill Woods to take the master’s chair to enable him to have the enjoyment of installing his own son Phillip, as the next master of the lodge. Prior to the commencement of the ‘inner workings’, Don Richardson rose to explain to the brethren, some of the upcoming variations from the usual practised ritual.

Bill went on to install Phillip in the chair of the lodge in a full ceremony, including variations, performed in a first-rate manner that was appreciated by all concerned. As part of the ceremony, the working tools of an installed master were explained by George Askins and those of the third degree by Martin Wootton. The second degree tools were explained in the long form by Hal Hamer and those of the first degree by Rod Love. 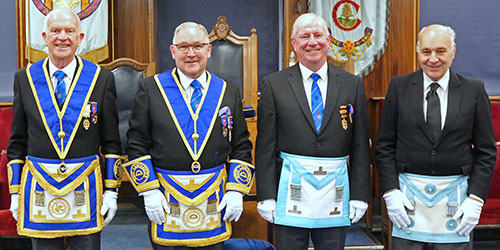 Again, on this special occasion, Richard forewent his position as immediate past master and transferred that honour to Bill who, in his new position, was addressed by Don Richardson. Following the investiture of the lodge officers, the address to Phillip was also given by Don Richardson. The address to the wardens was delivered by John Karran, and the final address, that to the brethren of the lodge, was presented by Tony Harrison.

At the conclusion of the ceremony, Tony rose to give his personal greetings and congratulated Phillip on attaining the masters chair. He wished him well for his year in office, a year he hoped would be very busy. Turning to Bill, he congratulated him on the excellence of his ritual and the pleasure he had obviously derived from installing his son into the chair. His congratulations extended to Richard Maddocks for his work during the early part of the ceremony, a ceremony that he agreed, had been different. He felt it had been an occasion for the furtherance of Masonic knowledge.

Phillip rose to thank Tony for his kind and generous comments and had the pleasure of presenting him with three cheques. The first was for £250 in support of the Preston Masonic Hall, the second, also for £250 was in support of North West Blood Bikes and the third, for £1,250 was a donation to the MCF 2021 Festival. Tony thanked the lodge for their generous donations and added his own personal thanks for the donation to the Festival and presented the lodge with a certificate of recognition as a Vice Patron of the Festival.

Later in the evening, in response to the toast to his health, Tony thanked David Winder for his kind comments. He did admit that, although his schedule is very busy, he does get a few Sundays off. He thanked the wonderful team he has around him for their continued help and support. 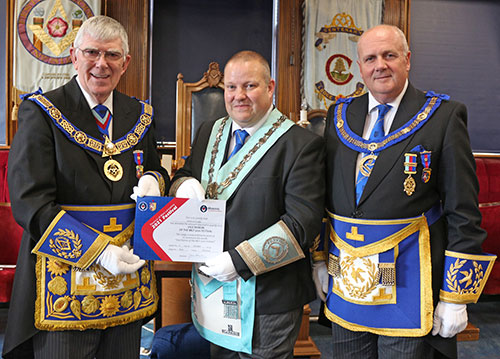 Moving to the lodge members, Tony congratulated Phillip Woods on his installation as master of the lodge with congratulations also going to Bill Woods for a wonderful and sincere ceremony he had so enjoyed. Continuing with his appreciation, he thanked the Steve Bolton, and his team of group officers for all the work they do in support of Freemasonry in Preston. He acknowledged the work of the Masonic Hall Chairman Terry McGill and his team for the vital service they provide in running and maintaining what is a wonderful Masonic Hall.

Moving on to other matters, Tony was pleased to note that the general trend of membership in Freemasonry is in an upwards direction. Increasing numbers of prospective candidates are joining the Craft and retention of existing members is having a positive effect. Although the Membership Pathway scheme would help in generating new members, he asked the brethren to continue to look for suitable candidates. He reminded the brethren that the Royal Arch is the completion of Freemasonry and wouldn’t it be marvellous if the present level of 43% membership throughout the Province of West Lancashire could be raised to 50%.

Returning to the evening’s events, Tony thanked the lodge for the very generous donation to the MCF 2021 Festival made earlier. He thanked all those who have obtained a Festival Jewel and asked others who have yet to make that pledge to consider doing so. He reminded the brethren that the Masonic Charity Foundation funds many projects in West Lancashire and as a result, the Province is a net beneficiary with regards to the Foundation.

Tony concluded his response by asking everyone to continue to enjoy their Masonry and closed by thanking the lodge for the warmth of their reception and the hospitality he had received.

In response to the toast to his health. Phillip thanked all those who had made the ceremony so wonderful. He went on to individually mention them all with particular thanks going to Steve Bolton and Ross Kinder for their help in dealing with the ritual and Don Richardson for being the fountain of all knowledge.

He closed the evening by presenting bouquets of flowers to Tony, David and Keith as ‘thanks’ to their respective wives for letting them out once again. He also presented a bouquet to lodge member George Thornhill as a thank you to his wife for producing a magnificent table plan for the dining.

Phillip (centre) with a vast array of distinguished guests.