The installation meeting of Royal Preston Chapter No 333 began what is to become a new tradition within the chapter with the presentation of the ‘Trevor Hampton Past First Principal’s’ Jewel. 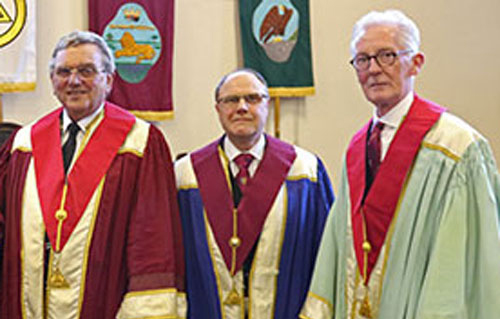 Pictured from left to right, are the three principals: John Clulow, David Poulter and Peter Donnelly.

First principal Trevor Phillips, welcomed all the visitors and opened the chapter to conduct the administrative business. At its conclusion, the DC, Mike Jones, accompanied by the ADC Peter Donnelly, requested permission to retire from the chapter. Paul Hesketh then entered to announce the presence of Ian Higham who entered in due form accompanied by Ian Cuerden, Steve Bolton, Joe Collier, Peter Ledder and his chapter escort.

Trevor had the pleasure of welcoming Ian, offering him the sceptre of his office. Ian thanked him for the privilege of taking the first principal’s chair but returned the sceptre expressing the feeling that it was already in good hands. The visitors were then treated to an excellent installation ceremony with John Clulow installing his successor, Peter Donnelly as the third principal of the chapter, David Poulter in turn, installing John as his successor as second principal and Trevor Phillips, subsequently installing David as his successor as first principal.

In turn, he three principals elect were duly presented for installation by Mike Jones and invited to reaffirm their obligations as to the duties of their respective offices. The scripture readings were delivered by David Caldecott, Patrick Bracewell and Vic Parker respectively with all the associated prayers being given by Mel Johnson. Closing his year as the first principal of the chapter, Trevor rose to thank all his officers for their support and assistance during his year in office. 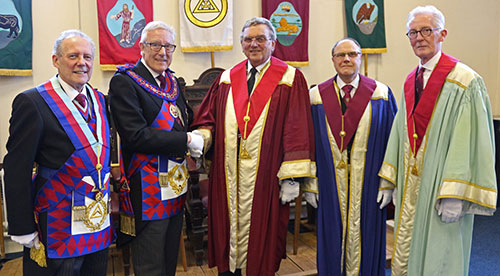 The scarlet, purple and blue robe addresses were given by Simon Worswick, Steven Grimshaw and Vic Parker respectively, all of whom made first-class presentations. During the appointment of officers Trevor Phillips was re-appointed as the charity steward of the chapter and was, as a reminder, addressed with regards to his duties and responsibilities by the Preston Group Charity Steward, Vic Parker. The address to the three principals was given by Joe Collier and that to the officers by Mike Jones. The concluding address, that to the companions of the chapter was given by the principal guest, Ian Higham.

At the end of the installation ceremony, Ian brought the greetings and congratulations of the Grand Superintendent Tony Harrison, commenting that had he been present he would not have witnessed a finer ceremony as had just taken place. On Tony’s behalf, he congratulated David on attaining the first principal’s chair once again, wishing him well for his year in office. He went on to congratulate Trevor for his work during his year as first principal as well as his contribution to the evening’s ceremony.

David in reply, thanked Ian for his kind comments on behalf of the Grand Superintendent and as the charity donations to be made were collected during his predecessor’s time in office, he invited Trevor to present the charity cheques. The first, to the value £350 was in support of the MCF 2021 Festival. The second, for £50 was in support of the West Lancashire Freemasons’ Charity and the final cheque for £300 was in support of the Lancashire and South Cumbria Kidney Patients Association. These donations were in addition to previous giving totalling £339, thus making a grand total for the year of £1,039. In accepting the cheques on behalf of the various causes, Ian thanked the chapter companions for what he considered to be a phenomenal amount, considering that the members already make charitable donations through their various Craft lodges.

Stan Rigby rose to give a brief history of the contribution former chapter member, the late Trevor Hampton, had made to the chapter over his many years of service. He particularly mentioned the encouragement and help he had given to the newer members in making their progress through the chapter offices. Stan then had the pleasure of presenting the outgoing first principal Trevor Phillips with the chapter’s immediate past first principal’s jewel, that for ever more will be referred to as the ‘Trevor Hampton Memorial Jewel’. Trevor thanked the chapter for the honour of being the first recipient of the jewel. Being a friend of the late Trevor, he was well aware of the contribution he had made to society both in and out of Freemasonry.

Later in the evening in response to the toast to the grand officers, Ian said it was the first time he had visited Royal Preston Chapter. He was pleased to have the company of Ian Cuerden, Geoff Saul, Steve Bolton and Joe Collier. He congratulated Steve on his forthcoming appointment to Grand Lodge and was equally pleased to have the company of Peter Ledder in his capacity as an acting Provincial grand officer. 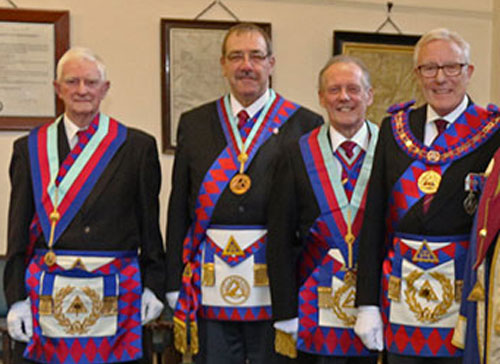 Ian went on to congratulate the three principals on their preferment, wishing them an enjoyable year in office and complemented all those who had a part to play in what had been an excellent ceremony. His congratulations extended to John Clulow who was to receive an appointment to an acting rank at the meeting of Provincial Grand Chapter in October. He was gratified to note that on his first visit to Royal Preston Chapter he had witnessed the start of a new tradition in the presentation of the ‘Trevor Hampton Jewel’.

Turning to charity, Ian thanked the chapter for the magnificent donations made earlier. He went on to remind the companions, that during the previous 2010 West Lancashire Festival, the sum of £5,400,000 was donated. However, since then the Province has received £1,000,000 each year from the grand charities making the Province a net beneficiary from those charities. He urged those who had yet to support the festival to please consider doing so and to wear the accompanying jewel with pride.

Moving on to Freemasonry in general, Ian was pleased to say that the recent publicity by way of television programmes had raised the interest of the public. More brethren are coming into Freemasonry and as a result are bringing in their friends. He encouraged everyone to be proud and open about their membership.

Although concentration of attracting new members is important, Ian reminded the companions that retention of existing members was equally important. To that end he encouraged the companions to look after their newer members by taking an interest, answering their questions and making them feel to be one of the chapter family. Ian concluded by thanking, secretary Howard Linaker and DC, Mike Jones for their assistance and work in providing information prior to the meeting and a special thank you went to Paul Hesketh for his preparation and contribution to the smooth running of the day.

The chapter continued its collection for good causes by holding a ‘Chorley’ raffle during the installation banquet. This raised £114 that was to be shared between the MCF 2021 Festival and Preston Masonic Hall. 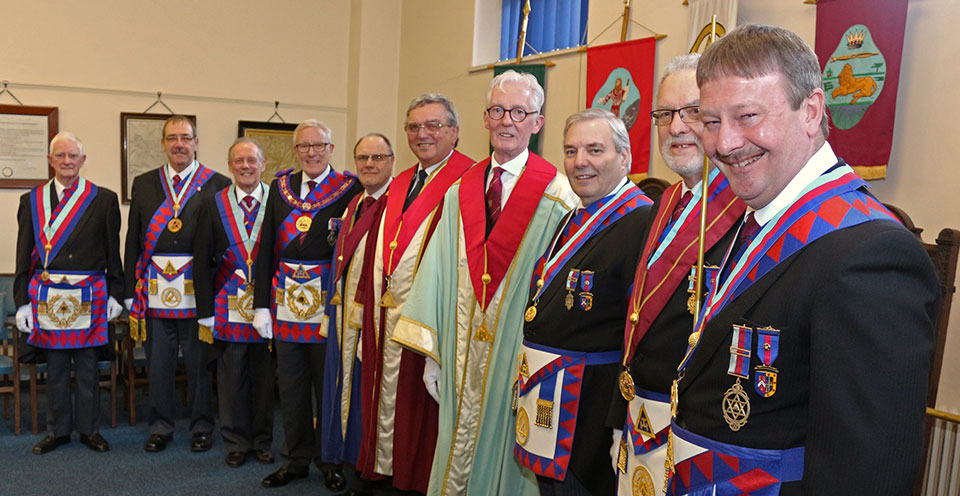