Dining fixture with a Referee

The Preston Group, under the direction of its chairman Stephen Bolton, has held its ‘Biennial’ Dinner’. The principal guest for the evening was Paul Renton, Deputy Grand Superintendent of the Royal Arch Province of West Lancashire. 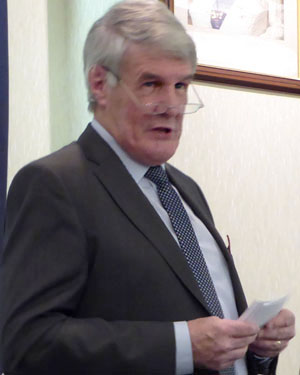 Paul Renton responding to the toast to his health.

The meeting commenced with a reception at which provincial representatives were present, including Stewart Seddon, Assistant Provincial Grand Master for the Preston, Chorley and Leyland Groups.

On conclusion of the meal and upon completion of the formality of the required toasts, Stephen Bolton welcomed the brethren and thanked them for their attendance.

The toast to Paul Renton was delivered by Michael Threlfall, master elect of Lodge Amounderness No 7105, in a most courteous and sincere manner. In his response, Paul thanked the kind proposition of the toast and the brethren and companions for the way they received it. Paul said that it was good to be back in the Preston Group once again, a group where he actually got back into the Royal Arch (Winckley Chapter No 5438) having been exalted into Stonehenge Chapter No 6114 in Wiltshire.

Paul said: “The success of any Masonic group owed much to the leadership and guidance of group chairman and of course all of their hardworking group officials. Preston is no exception, all the current officials, as well as those who have served the group well in the past, who are here this evening deserve a well-earned round of applause.”

Paul went on to say that in terms of the Preston Group, and as a displaced member of the Leyland Group, he would like to take the opportunity of stating his appreciation for the accommodation of the various Leyland Group lodges and chapters at Preston Masonic Hall, and for the welcome extended to them.

Paul referred to his close involvement in rugby union football and in particular refereeing; he illustrated this by one or two anecdotes.

Paul expressed his thanks to the catering team, the group secretary and the deputy director of ceremonies. He also thanked the very senior past Provincial grand officers for their company, as well as everyone else for their attendance.

In conclusion, Paul mentioned ‘enjoy Freemasonry’; to this end, he recommended a cultivation of a deeper understanding of ritual; retention of members by developing strategies that have a far greater focus on seeking the views and needs of individual members. Lodges and chapters must plan proactively for the future and always challenge the often-quoted Masonic lament: “We’ve always done it this way.” The Royal Arch is a classic example of this simply not being the case. history shows that since the Union of 1813 some 43 major changes have been made to the way chapters function. Finally, Paul thanked Michael Threlfall for the proposition of the toast and the brethren and companions for their patience in hearing his response.