The Provincial Grand Master Tony Harrison was the principal guest as he attended the installation ceremony of Lodge of Unanimity No 113. 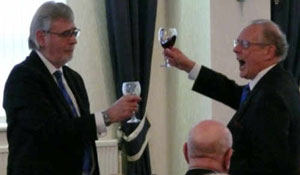 The master’s song being performed by Ian Cuerden (right) to Howard Linaker.

After welcoming the visitors, master of the lodge Stan Rigby, opened the lodge in the usual manner. On completion of the administrative business, the lodge was raised to the second and then the third degree before the entrance of the Provincial Grand Master and his entourage of grand and Provincial grand officers.

On arrival, Tony was formally welcomed into the lodge by Stan, who then offered him the gavel of the lodge. Tony returned the gavel, thanking Stan for his warm welcome saying he was looking forward to the ceremony.

Following salutations and before the commencement of the installation ceremony, the lodge returned to the second degree. 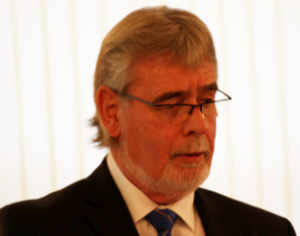 Howard Linaker responding to the toast to his health.

The installation ceremony commenced with lodge member Trevor Phillips presenting master elect, Howard Linaker to Stan for installation. Stan informed Howard of his forthcoming duties as master and accepted his obligation to do so.

Stan went on to install Howard into the chair of the lodge in a ceremony which was performed in an excellent manner that was fully appreciated by all concerned. As part of the ceremony, the working tools of the third degree were explained by Garry Norris. The second and first degree tools were explained by Trevor Phillips.

The various addresses were delivered in exemplary manner by Ray Taylor to the wardens, Garry Norris to the deacons and Peter Watson to the brethren. In all, the whole ceremony was planned and presented with the unanimity of all those involved.

At the conclusion of the ceremony, Tony rose to give his personal greetings and congratulated Howard on attaining the master’s chair. He wished him well for his year in office, a year that he hoped would be very busy. Turning to Stan, he congratulated him on the excellence of his ritual. Tony also made special mention of Trevor Phillips, the director of ceremonies of the lodge, who performed his role in a most exemplary manner. 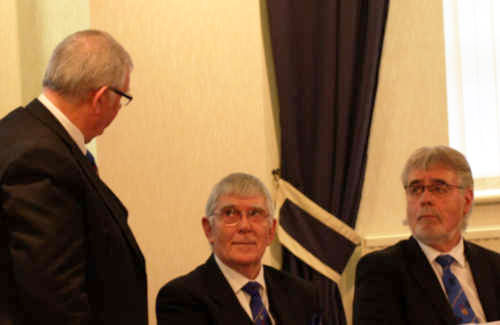 Howard rose to thank Tony for his kind and generous comments and had the pleasure of presenting him with details of charitable donations. The first was for £750 in support of the MCF 2021 Festival, the second for £200 was for Rosemere Cancer Foundation. Furthermore, significant donations had been made to Preston Masonic Hall during the year.

Tony thanked the brethren of the lodge for their generous donations and added his own personal thanks for the donation to the Festival; he also reiterated the importance of supporting Masonic halls.

Bill Seddon was invited on to the floor of the lodge in order to present a past master’s jewel to Stan Rigby; this was delivered in Bill’s usual statesman’s manner.

In response to the toast to his health, Howard thanked all those who had made the ceremony so wonderful.