David Catterall had the pleasure of installing Paul Hardman into the chair of Halcyon Lodge No 6500 in a delightful ceremony.  Suffice to say, the delivery of the ritual by David was very good. 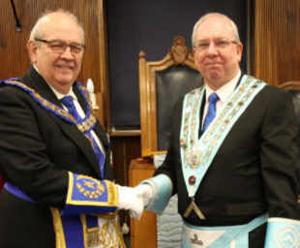 David Catterall, as master of the lodge, welcomed all the visitors before opening the lodge in the first degree. After transacting the administrative business, it was raised to the second and then the third degree before the entrance of the Deputy Provincial Grand Master Philip Gunning, accompanied by grand officers and acting Provincial grand officers in attendance. Philip duly entered the lodge to be formally welcomed by David, who then offered him the gavel of the lodge. Philip returned the gavel, thanking David for his warm welcome saying he was looking forward to the ceremony. 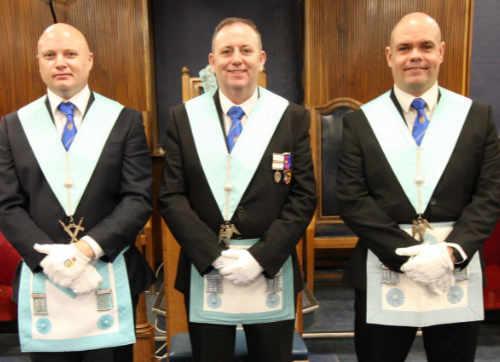 David went on to install Paul in the chair of the lodge in a ceremony, which was performed by him in a sincere manner; this was fully appreciated by all concerned. As part of the ceremony, the working tools of the third degree were explained by Chris Barry.  The second degree tools were explained by Allan Bowerman and those of the first degree by Darren Ashcroft.

The various addresses were delivered in exemplary manner by Brent Sutton to the deacons, John Taylor to the inner guard and Ray Lamb to the brethren of the lodge, with a very profound rendition.

At the conclusion of the ceremony, Philip rose to give his personal greetings and congratulated Paul on attaining the master’s chair. He wished him well for his year in office, a year he hoped would be very busy. Turning to David, he congratulated him on the excellence of his ritual.

Paul rose to thank Philip for his kind and generous comments and had the pleasure of presenting him with details of charitable donations. The first was for £650 in support of the MCF 2021 Festival, the second for £400 was for SANDS (Stillbirth and Neonatal Death Charity); £400 in support of UK Diabetes Association; £400 for Galloway’s Society for the Blind. Philip thanked the lodge for their generous donations and added his own personal thanks for the donation to the Festival; he also reiterated the importance of supporting masonic halls.

In response to the toast to his health, Paul thanked all those who had made the ceremony so wonderful.