The brethren of Ribble Lodge No 4558 welcomed into its midst Dr Matthew Acton when he was initiated into Freemasonry in the first meeting of the new Masonic season. 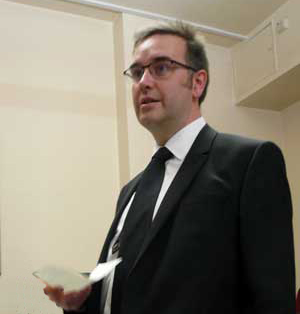 Matthew responding to the toast to his health.

The initiation ceremony was undertaken by a variety of brethren within the lodge: Terry Turley, Simon Wright, Mike Cowsley, David Asbridge and David Forrest.

The ritual was delivered with meaning and sincerity to a very high standard. The visitors to the lodge gave fulsome praise to the performance of the ritual which was very well deserved.

The Preston Group Chairman Stephen Bolton led the visiting brethren in hearty congratulations to the lodge for their outstanding efforts.

At the festive board the celebrations continued. After the toast to the health of the initiate was given it was responded to by Matthew, which in turn was received with much acclaim from those present.

Officers and brethren of the lodge.