Lodge of Endeavour No 7036 announced this extra and exceptional evening to their programme. The lodge was ‘invaded’ by a Scottish contingent from the Lodge St Bryde No 579, the purpose of which was to carry out a full demonstration of a third degree ceremony in the Scottish rite. 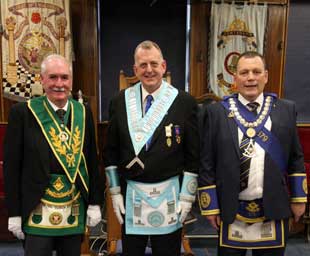 The contingent from Scotland included James Jack, Past Provincial Grand Master of the Grand Lodge of Scotland, along with 20 brethren as well as a further five brethren from Emblem Lodge No 6727 in Blackpool.

After attending to the usual lodge business, the deputation from the Lodge St Bryde entered the room and was greeted by the WM Ron Docherty to which Russell Parson, WM of Lodge of St Bryde, duly responded. Upon receiving the gavel, Russell commenced the demonstration ceremony.

The brethren immediately knew that they were being treated to a delivery of ritual of the highest standard. It is fair to say that brethren who were not in attendance denied themselves of a most outstanding display. Upon conclusion, the demonstration team received generous applause and appreciation after which celebration of the evening continued at the festive board.

The festive board followed the standard of the demonstration and consisted of a menu in keeping with Scottish tradition. The haggis was ‘piped in’ with customary style after which the address to the haggis was given. Apart from haggis, the brethren enjoyed highland game pie with the usual trimmings followed by Atholl Brose pudding, coffee and shortbread.

It was evident to all concerned that a good deal of work had been undertaken to provide an evening of first class ritual and entertainment for which fulsome praise was given.

Ron Docherty (centre) with the brethren of Lodge St Bryde.