As many will be aware, our Provincial Grand Secretary Peter Taylor is undertaking three sporting challenges and raising money via sponsorship in support of the Masonic Charitable Foundation 2021 Festival and Meningitis Now. 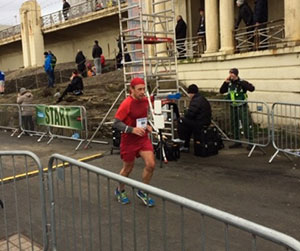 In his first ‘blog’ regarding the events, Peter has said:

“A short time ago, on a Sunday morning I took part in the first event of my ‘Sporting Trilogy’, which was the Great North Western Half Marathon.

The race took place on the promenade in Blackpool and started just opposite The Hilton Hotel, where a record attendance of 902 runners were started at 11:00am.

Unlike last year the weather was very kind, the rain kept off and the sun came out to shine on the righteous. Although when we turned south at Cleveleys, the head wind was very strong, which took its toll over the last four miles.

At this point, I was on schedule to break 1hr 45 mins, but slowed badly over the last two miles and I only managed 1hr 47.59 mins, but nevertheless this was almost one minute quicker than last year. 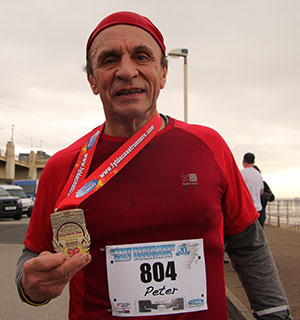 My sincere thanks go out to those who came to support me, as it really did make a difference to hear the shouts of encouragement, especially towards the end.

Finally, my thanks to all of you who have sponsored me so far, the running total (excuse the pun) so far is around £3,600 which is an incredible amount and more than I ever imagined.

The next event is the ‘Daddy’ of them all which is ‘The Coniston 14’, which takes place on 30 March and is not for the faint-hearted. I’ll let you know how I go on!”

It’s not too late to help Peter raise an even bigger total, by sponsoring him.The secure online fundraising page cab be accessed, HERE