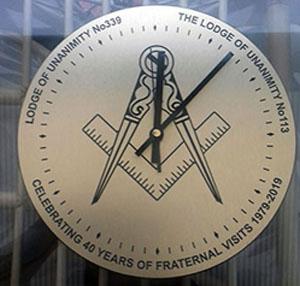 To add to the occasion, the lodge brethren took with them an inscribed wall clock that had been sourced by the WM of the lodge, Stan Rigby.

In turn, the donation of the clock was included as an item of business during the lodge meeting. To augment this milestone, the presentation was made by Peter Watson, who was master of Lodge of Unanimity No 113 at the time of its first visit, some 40 years earlier.

In receiving the clock, master of Lodge of Unanimity No 339, Alan Foggin, thanked Peter for the very generous donation of such a wonderful memento. It was an item that would be treasured and act as a constant reminder of the continued close association between the two lodges.

Further adding to the occasion, the event was supported by brethren from both Helvellyn Lodge No 8979 and Ullswater Lodge No 3297. 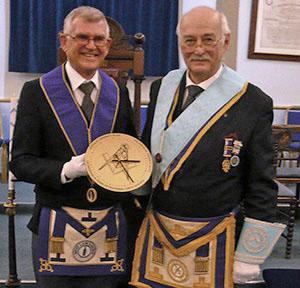 Later in the evening, ‘339’ member David Fallowfield, provided a comprehensive resumé of the association between the two lodges.

He commenced by mentioning the reason for the original visit of Lodge of Unanimity No 113, which was to return various items belonging to the late brother Mayer of ‘339’ that had come into the possession of ‘113’.  It was a visit that subsequently expanded into an annual event.

As a result, over the past 40 years many individual friendships have been formed by attendance at not only the regular, annual reciprocal visits, but also at the various installation ceremonies and special events such as celebration of 50-year anniversaries of brethren in Freemasonry.

David concluded his resumé by paying fulsome tribute to the presence of ‘113’ members Peter Watson, John Watson, Ray Taylor and of course, the present master of ‘113’, Stan Rigby.

The Lodge of Unanimity No 113 visitors with Alan Foggin (third right, front row).