David takes the chair for the third time

David Catterall returned to the chair of Halcyon Lodge No 6500 for the third time and the lodge was honoured by the presence of Assistant Provincial Grand Master Derek Parkinson and Past Assistant Provincial Grand Master Bill Seddon. They were accompanied by grand officers Ian Greenwood, Stan Rigby and Chairman of Preston Group Stephen Bolton. They were supported by four acting Provincial grand officers. 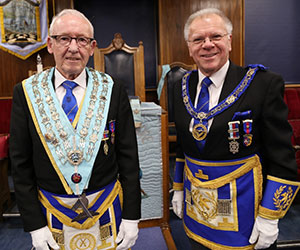 Derek (right) congratulates David on returning to the chair of Halcyon Lodge for the third time.

After welcoming the visitors, Brian Woodburn as master, opened to the lodge in the usual manner to carry out the administration business of the lodge. On completion, the lodge was raised to the second degree before the director of ceremonies Ray Lamb, requested permission to retire for a short time. During his absence, the lodge was raised to the third degree before Ray returned to announce the presence of the principal guest of the evening, Assistant Provincial Grand Master Derek Parkinson. Derek entered in due form accompanied by Bill Seddon and other grand and acting Provincial grand officers to be formally welcomed by Brian. Salutations were given before the lodge returned to the second degree.

The lodge was then returned to the second degree and the installation ceremony commenced with Ray Lamb presenting David to Brian for installation as the next master of the lodge. After Brian reminded David of his duties as master, he was invited to recite his obligation to carry out these duties.

Returning the lodge to the third-degree Brian thanked the officers and brethren of the lodge for all their support during his year of office. He then went on to install David as his successor in the master’s chair ably assisted by Ray. Now as master, David had the pleasure of investing Brian as the immediate past master of the lodge, before the address to the master was delivered in an excellent manner by the principal guest. 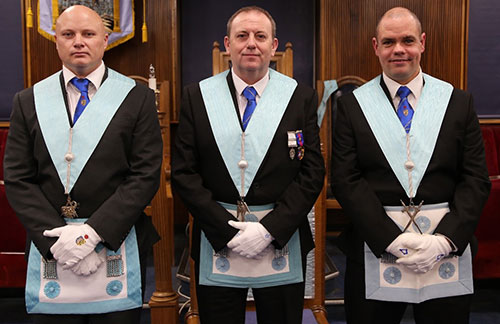 The working tools team, from left to right, are: Chris Barry, Alan Bowerman and Darren Ashcroft.

The working tools in the third, second and first degrees were presented by master Masons, Chris Barry, Alan Bowerman and Darren Ashcroft respectively, all of whom gave faultless performances.

During the investiture of the officers, the senior warden was instructed in his duties and addressed in an admirable manner by Malcolm Sugden. Not being present, the appointment of the junior warden was deferred to a later date.

The lodge deacons were addressed by Brent Sutton with the address to the inner guard and stewards being given by John Taylor. The final officers address, that to the tyler, was given by Terry McGill. All the addresses were presented in an exemplary manner by the brethren concerned.

The ceremony drew to a close with an address to the brethren of the lodge, delivered in an equally exemplary manner by Ray Lamb. This particular address is a much-extended version of the regular address and its presentation was greatly appreciated by all present.

At the conclusion of the ceremony, on behalf of the Provincial Grand Master Tony Harrison, Derek brought his congratulations and best wishes to David for taking the chair of the lodge for the third time, He continued by congratulating Brian for his work in installing his successor and thanked all who had taken part in a most worthy ceremony. He closed by particularly mentioning Ray Lamb’s excellent delivery of a very extended address to the brethren. 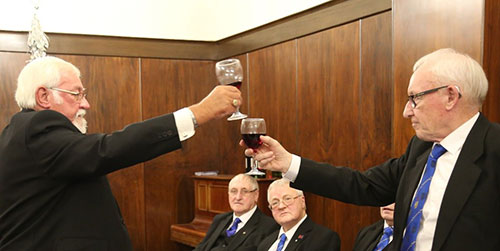 The master’s song being sung by Bob Tinsley (left).

David responded by thanking Derek for his generous comments on behalf of the Provincial Grand Master and had the great pleasure of presenting two cheques, the first for £650 to the MCF 2021 Festival and a second for £300 to the Preston Masonic Hall Foundation. Derek in turn thanked the lodge for their generosity.

Later in the evening, in response to the toast to the grand officers, Derek brought his personal congratulations, saying how much he had enjoyed the ceremony. He also stated how pleased he was to have the company of Bill Seddon, Steve Bolton and the other grand officers present.

He had praise for David in taking the chair for the third time and to Brian for the excellent and sincere way in which he installed David in the master’s chair. He also congratulated the three master Masons for the commendable way they had presented the working tools. A special mention was also given to Ray for his attention to detail as the lodge director of ceremonies.

Moving on, Derek talked about the recruitment of new members, Masonic and non-Masonic charities and the good work that they do both here and abroad, whilst also mentioning the need to support the Preston Masonic Hall.

The evening’s proceedings were further enhanced by a delightful rendition of the master’s song sung by Bob Tinsley and accompanied by Howard Linaker.

Article and photographs by Peter Bennett.