Sincerity installs its next master

The installation of Mark Reilly, as the new WM of Preston Lodge of Sincerity No 8085, took place at the Norman Jepson Hotel in the presence of Ian Greenwood. On this occasion, Ian was acting as the representative of the Provincial Grand Master Tony Harrison. He was accompanied by the vice chairman of Preston Group Geoff Saul, together with acting Provincial grand officer Peter Ledder. 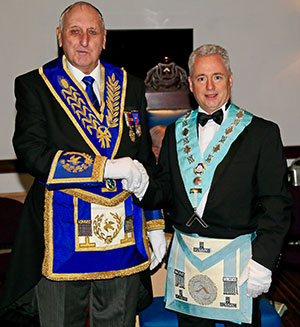 Having a close affiliation with Preston Lodge of Sincerity, six members of Lodge Earl Haig No 1260 in the Scottish Constitution, braved the bad weather to give their support to the occasion.

The meeting began when the lodge director of ceremonies, Mike Brownlee, requested brethren to stand to receive the WM, Ian Bacon, accompanied by his wardens. The lodge was then opened in the first degree and the minutes of the previous meeting were read, confirmed and signed.

Following the completion of the administrative business of the lodge, the lodge was then opened in the second degree and then the third degree. The DC retired and then returned to announce that the representative of the Provincial Grand Master requested permission to enter. Ian, accompanied by Geoff Saul and other Provincial grand officers, duly entered the lodge to be warmly welcomed by the WM.

The lodge returned to the second degree and the master elect Mark Reilly, was presented for installation by Frank Cook. Mike, as the installing master, informed Mark of his duties as master and went on to install him into the chair of the lodge in a full ceremony performed in a first-rate manner that was appreciated by all concerned.

As part of the ceremony, the working tools of the third degree were explained by Frank Cook, those of the second degree by Howard Lythgoe and those of the first degree by Robert Norris, all of whom gave excellent presentations. 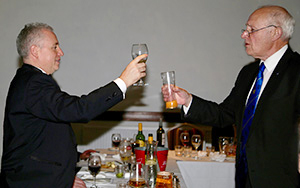 Kevin Ruffley (right) concludes the master’s song with a toast.

The address to the master was delivered by Ian Bacon and following the appointment of lodge officers, that to the brethren of the lodge was given by the principal guest, Ian Greenwood.

Following the ceremony, Ian Greenwood conveyed the good wishes and congratulations of the Provincial Grand Master Tony Harrison, saying that had he been in attendance he would undoubtedly have congratulated the installing master and the lodge DC.  Ian also said that Tony wished all brethren to continue to enjoy their Freemasonry.

Mark, now as master of the lodge, had the pleasure of presenting Ian with a cheque for £400 in support of the MCF 2021 Festival. Ian, in turn, thanked the lodge for their generous donation adding that it would be put to very good use by the Masonic charities.

Member of Lodge Earl Haig, John Heron, then had equal pleasure presenting Mark with a Masonic Bible. Mark thanked John and the members of Lodge Earl Haig and said he would always treasure this thoughtful gift.

After the principal guest and group officials had retired, the lodge was closed in due form, so that the brethren could retire to enjoy a hearty meal, some libation and good company.

Later in the evening, following the toast to Mark, Kevin Ruffley gave an excellent rendition of the master’s song that closed with a toast to Mike.

Article and photographs by Peter Bennett.