The installation meeting of the Chapter of Unanimity No 113 was conducted in an efficient manner as two of the three principals elect had held their respective positions on a previous occasion. The principal guest, representing the Grand Superintendent Tony Harrison was the Provincial Scribe Nehemiah David Barr, who was accompanied by the Preston Group Vice Chairman, Geoff Saul and grand officer Stan Rigby. 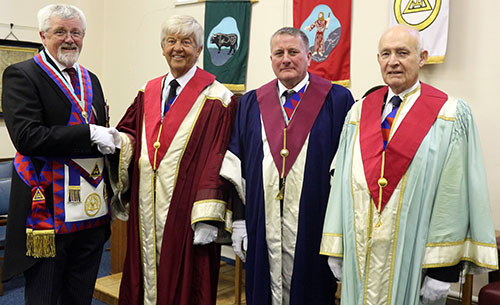 David (left) congratulates the three principals on their preferment.

After welcoming all the visitors and guests, the chapter was opened in the usual manner by the first principal, Robert Pye. Following the completion of the administrative business of the chapter, the DC, Jim Gibson, announced the presence of David Barr as the representative of the Provincial Grand Superintendent. David entered the chapter in due form accompanied by Geoff Saul and Stan Rigby to be welcomed by Robert who wished him an enjoyable evening in the chapter.

The ceremony commenced with Kevin Ruffley being installed as third principal by Duncan Taylor in a well delivered manner, the scripture reading being given by David Barr. As Kevin had not held the office before, the ceremony was carried out in full. Duncan, being a past first principal and after reaffirming his obligation, was installed directly into his chair by Ray Taylor. In this instance the scripture reading was given by Geoff Saul. Similarly, Ray, as first principal elect, was in turn presented to Robert, who had the pleasure of installing him directly in his chair as the first principal with Stan Rigby delivering the scripture reading. In all three instances, the appropriate prayers were delivered by Martin Slater. The three principals were in turn, presented for installation by the chapter DC, Jim Gibson. The scarlet, purple and blue robe addresses were delivered by Robert Pye, Ray Taylor and Jim Gibson respectively.

At the conclusion of the installation ceremony David rose to bring the greetings and congratulations from the Grand Superintendent, wishing the three principals an enjoyable year in their respective offices. Ray responded by thanking David for his kind words on behalf of the Grand Superintendent and on behalf of the chapter, had the pleasure of presenting David with a cheque for £113 in support of the MCF 2021 Festival. David thanked the companions of the chapter for their generosity. The ceremony concluded with Robert appointing and investing his officers for the ensuing year.

Later in the evening, in response to the toast to the grand officers, David thanked the chapter companions for the warm welcome he had received on his arrival and brought his own congratulations to the three principals, wishing them an excellent year in office. His congratulations extended to all those who had a part to play in the earlier installation ceremony. He said how much he enjoys the differences in ritual he sees on his visits to different chapters. He found the scripture readings delivered earlier, a change from what he was used to hearing.

Turning to the current MCF 2021 Festival, David thanked the chapter for the donation made earlier. He was pleased to see so many companions wearing the Festival Jewel. He asked those members who have yet to donate to the Festival to consider doing so and to wear the Festival Jewel with pride. He informed the companions that qualification to receive a Festival Jewel currently stands at around 22 pence per day, for the remaining three years the Festival has to run. To set this in context, David reminded the companions that West Lancashire is a net beneficiary with regards to receiving help from the Grand Charities. In recent times the amount received has totalled £6,500,000 which is considerably more than they have received in contributions from the Province of West Lancashire. He reminded the companions that whilst supporting the MCF 2021 Festival, they should not forget their Masonic hall and to do as much as they can to support it.

With regards to increasing membership numbers in the Royal Arch, David requested that companions go back to their own Craft lodges and approach those brethren who are not yet members of the Royal Arch and to offer them encouragement to take that next step in their Masonic progress. He reminded everyone that the Royal Arch is the completion of the third degree. He encouraged everyone to be open about their Freemasonry and to, above all, continue to enjoy their membership of the Royal Arch.

David concluded by thanking Geoff Saul, former group chairman Stan Rigby and the group officers for their support and Gordon Pilkington for his communications prior to the meeting. He closed by reminding the members that the future of their chapter is directly in their hands.