The Provincial Grand Master Tony Harrison attended the installation ceremony of Ribble Lodge No 4558. He used the occasion to thank lodge member David Asbridge, for all his work as the Provincial Senior Grand Warden during the current year. 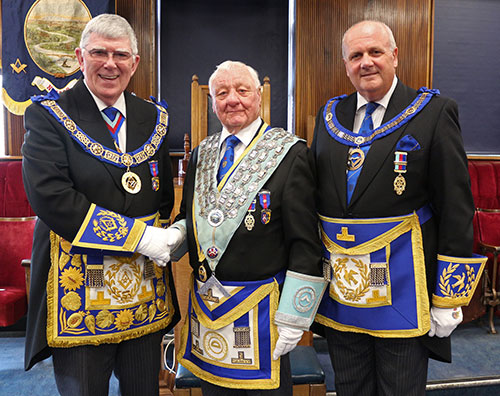 Tony (left) and David (right) congratulate Terry on his preferment.

Simon rose to thank the officers of the lodge for their support and assistance during his year in office. On behalf of the lodge members, he thanked the lodge chaplain Richard Butcher, lodge treasurer Gerry Graves and lodge secretary Derek Thompson, all of whom were retiring from office, for their many years of excellent service to the lodge. Simon then had the pleasure of inviting David Asbridge to occupy the senior warden’s position and Peter Allen, the junior warden’s position.

The installation ceremony commenced with Derek Thompson presenting Terry Turley to Simon for installation as the next master of the lodge. Simon, as the installing master, reminded Terry of his duties as master, following which he was obligated and then the lodge returned to the third degree. A board of installed masters was formed and Simon placed Terry in the master’s chair in an excellently conducted ceremony. The board was duly closed before lodge member John Rimmer took over the direction of the remaining part of the ceremony.

As part of the ceremony the working tools of the third degree were presented by John Rimmer, those of the second degree by master Mason, Alex Martinez and those of the first degree by David Forrest. The address to the master was given by David Winder. Peter Aikman was appointed senior warden and informed of his duties by the Provincial Senior Warden. Mike Cowsley was appointed junior warden and instructed in his duties by the Provincial Junior Warden who went on to deliver the address to both wardens. Reginald Richards was appointed chaplain and addressed by Richard Butcher. Derek Thomas, being unable to attend, will be appointed treasurer on some future occasion. David Forrest was appointed secretary of the lodge and addressed by Derek Thompson. Simon Wright was reappointed as charity steward to be addressed by John Rimmer who deputised for the group charity steward Vic Parker who was unable to be present on this occasion. The addresses continued with that to John Whitehead as the ADC also given by John Rimmer. Alex Martinez was appointed inner guard and addressed by Peter Maddison. The final address, that to the brethren of the lodge was delivered by the Tony Harrison.

Following the appointment of officers and the conclusion of the installation ceremony, Tony rose to congratulate Terry on his preferment, wishing him an excellent year in office. Turning to Simon, he equally congratulated him on his excellent work, not only as the installing master but for all he had done during his year in office. He went on to congratulate all the appointed officers and those who had had a part to play in what he considered had been an excellent ceremony.

Terry responded by thanking Tony for his generous comments and had the pleasure of presenting him with three cheques, totalling £1,450. The first to the value of £1,200 in support of the MCF 2021 Festival, the second, for £100, in support of the Rosemere Cancer Foundation and the final cheque of £150 as a donation to Blezma, the military charity for limbless veterans.

David Winder presented Simon with a past master’s jewel saying he remembered the time, eight years earlier, when he had visited Simon at home to assess him for possible membership of Freemasonry and Ribble Lodge. He congratulated him on his progress through the lodge and proving to be a worthy member. He concluded by wishing him well for the future.

The work in the lodge closed with Tony rising to pay tribute to David Asbridge for his commitment and excellent contribution to the Province in his role as the Senior Warden of the Province. This, he noted, was in addition to his duties as the Preston Group Pastoral Care Officer and Almoner of Ribble Lodge.

Later in the evening, following the installation banquet, David rose to propose a toast to the Provincial Grand Master, before which he gave his comments on the earlier ceremony. He was pleased to see members with a broad band of ages and backgrounds as a happy band of Masons conducting a delightful ceremony led by one of the younger members of the lodge. He congratulated Terry on his return to the master’s chair for the fourth time, feeling the lodge was in very experienced hands. David also offered his congratulations to David Asbridge on his excellent year as the Provincial Senior Warden.

In response, Tony thanked David for the toast to his health and extended his thanks to the members of Ribble Lodge for an excellent evening of Masonry and celebration. He thanked the many acting officers for their support, whom he recognised were also attending to support David Asbridge at his final Provincial team visit. He again added his thanks to David for what had been a hard year in which he had risen to the occasion.

Continuing with his appreciation, Tony thanked Steve Bolton for his invitation to attend and for all the work he does as the Preston Group Chairman, congratulating him on his impending appointment to grand rank. He mentioned the work behind the scenes of all the group officers, work that is always much appreciated.

He congratulated Terry on becoming master of the lodge for the fourth time, wishing him the best of health and an enjoyable time during his year in office.

Moving on to the forthcoming meeting of Provincial Grand Lodge, he first congratulated all those who were to receive appointments or promotions at the meeting before reminding the brethren that PSA tests sponsored by the WLFC would again be available prior to the start of the meeting. He encouraged brethren to avail themselves of this test as last year, of the 250 tests carried, out six brethren were advised to contact their GP’s.

He went on to mention the presentation of two motorbikes, costing £18,000 each, to the Blood Bikes organisation, made the week before. The costs included the bikes being adapted and liveried for Blood Bikes specific use.

Turning to Freemasonry in general, Tony referred to the current ‘Enough is Enough’ campaign being conducted by Grand Lodge in which Freemasonry is fighting back against the misinformation propagated in the media. He asked the brethren to be open and proud about their Freemasonry. He was pleased to see that membership was rising and since the ‘Enough is Enough’ statement was made public, there have been over 300 enquiries received from the public with 50 being received in the first two weeks. He reminded everyone present that they are all membership officers and to be active in seeking out good men and true. 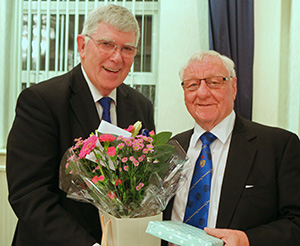 Terry presents Tony with a bouquet of flowers and chocolates for Maureen.

Mentioning the Royal Arch, Tony asked those Craft members who had yet to take that step, to please consider doing so as it is the completion of the Craft. Equally, he asked those who had yet to donate to the MCF 2021 Festival to also consider doing so. To qualify for a Steward’s Jewel, brethren are being asked to pledge 25p per day for the remaining three years of the Festival. He reminded the brethren that the Province of West Lancashire is a net beneficiary from the Masonic charities and gave an example where two hospices within the Province received a donation of £19,400 for the purchase of specialised equipment. Tony closed by wishing everyone well, encouraging them to continue to enjoy their Masonry.

Simon had the pleasure of proposing the toast to Terry, as the new master of the lodge. He congratulated him on what was his fourth visit to the chair wishing him well for his year in office. Much to everyone’s surprise, he concluded his toast by unveiling a print of Terry in his regalia as master for the first time, some 32 years earlier. This was met with much humour and resounding applause from the brethren. For once, Terry sat in a stunned silence!

There followed the traditional master’s song delivered as a duet, in an excellent manner, by Derek Thompson and Keith Dowley who were accompanied on the piano by Cedric McIlwaine.

The evening closed with Terry having the pleasure of presenting a bouquet of flowers and a box of chocolates to Tony as a gift for his wife Maureen, hopefully offering some form of compensation for being without his company for another evening. He also presented a bottle containing an agreeable libation, as a thank you gift to Tony from the lodge brethren.