The installation meeting of Jubilee Chapter No 5555 saw the first and second principals remain in office with Preston Group Chairman Steve Bolton being installed as the third principal. Although a somewhat shortened ceremony, it was conducted in an excellent and enjoyable manner. 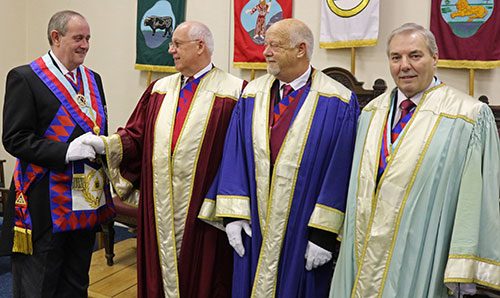 Prior to opening the chapter, the first principal Alan Howarth, welcomed all the visitors, thanking them for their support and wishing them well for the evening.

Following the opening of the chapter, the administrative business was conducted before the acting DC Mike Threlfall requested permission to retire from the chapter. On his return, he announced the presence of the evening’s principal guest, Tony Hall. Tony then entered the chapter accompanied by grand and acting Provincial grand officers to be formally welcomed by the first principal.

Before the commencement of the installation ceremony, Alan rose and warmly thanked the officers and companions of the chapter for their support and assistance during his previous year in office.

As both the first and second principals were remaining in office, DC Mike Threlfall duly proclaimed them as remaining in office. Chapter member Bill Woods then had the pleasure of presenting Steve Bolton for installation to the acting third principal Ray Birkbeck who invited Steve to reaffirm his obligation as to the duties of a third principal, which he’d taken on a previous occasion. Following which, the scripture reading was given by Ron Docherty and the prayer by Jim Bennett, both were delivered in a commendable manner.

Those below the rank of an installed third principal were requested to retire from the chapter for a short period whilst Ray reminded Steve of the signs and words associated with the position of third principal and placed him in his chair of office. The companions were invited to return to the chapter to hear the DC proclaim the three principals as now in their respective offices.

At the conclusion of the installation ceremony Tony brought the greetings and congratulations of the Grand Superintendent Tony Harrison, wishing the three principals well during their coming year in office. He continued by congratulating the chapter on the quality of the ritual in what had been a somewhat shortened ceremony. He concluded the good wishes of the Grand Superintendent by congratulating all the companions of the chapter who had taken part in the installation ceremony.

Later in the evening, in response to the toast to the grand officers, Tony brought his own congratulations and good wishes to the three principals and to the companions of the chapter. Although the installation ceremony was shorter than normal, he was appreciative of the excellent way it had been formulated and conducted. He thanked Alan Howarth and Alan Duffin for assisting with progression in the chapter by agreeing to remain in office for a further year. He particularly thanked Steve Bolton for his support of the chapter by taking on the office of third principal in addition to his many duties as the Preston Group Chairman. His thanks extended to the chapter Scribe Ezra, Jim Bennett for the information he had supplied prior to the meeting.

Turning to the charities, on behalf of the ultimate recipients Tony expressed his gratitude for the splendid charitable donations made earlier. Totalling £400, he considered it a magnificent achievement, particularly as the chapter members already donate to charity through their own Craft lodges. He informed the companions that in return, the Province of West Lancashire receives from the Masonic Charitable Foundation, charitable assistance totalling £1,000,000 each year.

Continuing, Tony reminded the companions of the constant need to look for new members of the right calibre, and not to forget that they were all membership officers. He urged them to look to their own lodges for brethren who have yet to take that important step into the Royal Arch. He further reminded the companions of the Grand Superintendent’s chapter urging as many as possible to join him at Provincial Grand Chapter in October.

Referring to other chapters, Tony recommended membership of the Setantia Chapter of First Principals No 7755 as an excellent vehicle to further knowledge regarding the Royal Arch. He prompted those eligible companions who had yet to do so, to consider becoming members.

Tony concluded by commenting on how nice it was to see so many visitors in the chapter with their numbers adding to the occasion. He thanked the four acting Provincial grand officers for their support saying that their enthusiasm and commitment is much appreciated and again their presence adds to the occasion. He closed by leaving the companions with the thought that the history of their chapter is in their heads and hearts, but its future is in their hands